Copied and pasted from http://blog.myspace.com/gunsnhorses

YEAAH!!!! THIS PARTY ROOOLED!!
On Sunday my friends Ommm and Lovely Brother AKA Land Of Playlist put on a wicked noiz/electro/fun night called Guns N' Horses. It was the best party I've been to foe agees!
There were lots of really friendly cute girls and boys, who were all having a lovely time!
Here are some of my friends. 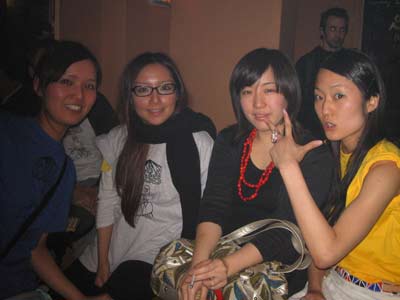 THEY'RE HAVING A WICKED TIME!!!!!
For this special occasion, Land Of Playlist made t-shirts and a compilation CD made especially for the evening. The CD is excellent, really groovy stuff, and the shirt rules!
Look at these beauties!

So as you can see on the flyer there were six music artists, and also added later was the brilliant visuals of the uber-talented WEIRDCORE! His VJing is definitely the bees-knees, so check out his stuff!

First was DJ NEGATIVE SKILLS. He played lots of tapes of a very diverse selection of music, skilfully woven together. A great DJ, better than Judge Jules!
Then GREYPETCAT, the enigmaic purveyor of solid dark industrial beats and basslines. He played a great 30 minute set, very well put together, with fantastic visuals of interference by Weirdcore (who did live visuals for everyone!!). Here is Greypetcat with his funky midi controller.

After Greypetcat came ORGAN MORGAN. He was playing some way out vibes on his old organ and theremin. He's a super player and composer who captivated everyone with his unique style. Go and see him if you get the chance!
Then came the lovely HIYOKO*MAME, I think this may have been her first solo gig, which is unbelievable!! She was soooo great, everyone loved her!!! Fantastic cheeky beats and melodies and some wicked rapping, singing and dancing. She is a mega-talented ultra genki energetic performer. People were dancing and loving her! And she played the Rocky them as her intro live on the keyboard. Charming!
Next up BBBLOOD. Wooooooooooooaaaaaaaahhhhhhhh!!!!
This guy is insanely good, definitely the loudest and coolest thing to come out of East Ham. He played for 15 minutes and literally blew everyone away! The most hardcore shit around, he was mental!! Rauarw! Props to the crowd for being very receptive to his extreme-ly good show, but of course all the credit belongs to him for turning in a star performance wrapped in lights! 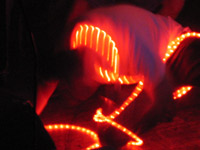 Last live act of the night was the mad bastard they call RUPERT MURDER! He took to the stage wearing his trademark R. Murdoch mask, and rocked the dancefloor with his insane dance-noise-murdercore music. The crowd were loving it and pulling off funky moves. Awesome!
Back to DJ Negative Skills to wrap it up with some dope tunes... and everyone went home beaming with happiness!
But I'm not going to finish without a huuuuuge THANKYOU to the best compere in the world, MARY SOUL! Who put in great efforts to entertain and inform everyone about the goings-on. She was so funny and cool, it wouldn't have been half as successful without her.
We love her!!!! She was dressed as Hugo Chavez! Here she is. 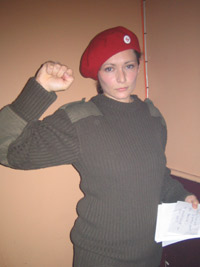 MANY MANY THANKS TO EVERYONE INVOLVED AND THE AUDIENCE FOR COMING DOWN AND BEING GREAT!!!!!

Thanks for reading,
love
Floppy xxxxxxxx

HeyHay thanks to the people who came to watch BBBlood's first London show. I thought it went pretty well considering a few technical hic-ups but just a quick reminder that I'll be playing

if you can make it along then that would be great.

Anyway last night, rah what a cool gig. First off I must take my hat off and pay my dues to Rich (Rupert Murder) the big cheese of Guns N Horses and to the other chap who put it on too. The night was awesome I think there could have been more people but it did go head to head with Lightning Bolt who were playing somewhere in London that night. But I think this show had more soul!

I turned up in the quiet little pub and went down the stairs I was absolutely shattered after a very long bank holiday weekend. Big bag in hand I sat down and had a couple of drinks then I set up a makeshift (shitty) merch stand where I think I probably only sold 1 record oh well.

Well then the music started all the acts were introduced by Mary Soul who was sporting some kinda military style get up and beret. Later on there was a guessing competition for who she was. Venezuela?? I don't remember much at that point.

I forgot to mention that at Guns N Horses you get free t-shirt and CD for the price of your entry. Bloody good value!

Anyway first up was Greypetcat who was a very big man who was hidden behind his laptops and stuff but the music was quite cool beats sounds and other wonderful stuff. I was quite busy manning the stall drinking, meeting and greeting people who'd come down to see me make a racket. Good set..

DJ Negative Skills was spinning the decks and making lovely sounds, I can't remember what he was playing.

Organ Morgan (http://www.myspace.com/organmorgan) was next up and unleashed a nice set I really was hitting the sauce by this time so all gets hazy but what I can remember was awesome organ sounds and some doors sounding bits and loads of psychedelic theremin / organ action very cool indeed and Jim is a top bloke I must catch Organ Morgan when he next plays.

Next up was Hiyoko Mame (http://www.myspace.com/hiyokomame) who started off with playing the Rocky theme on a melodica, what a way to start a set!! Then went into some good beats and singing and other stuff (you notice I use the word stuff to fill in blanks of my memory) loads of nice 8-bit sounding beeps and stuff and it was quite a fun set. Definitely check out her stuff it's really cool!

Ok so then BBBlood was up next, after a nice introduction by Mary Soul. I wrapped a tube of light around me and started freaking out with a old tobacco tin making feedback theremin and my sampler what didn't work (oh well I think it's probably past it now damn!!) yeah I think I played alright it was such a blast to be playing and I hope the crowd enjoyed it. I ended up bashing stuff on the floor and I can't remember much more than that. But thanks to all the people who WOOOOhhh'd and all the people who actually watched the whole thing. Ok so moving on...

Oh yes Action Jackson video taped it, hopefully I can get this online and use it for BBBvideos... And there was a very cool guy who I was introduced to was doing visuals to my set it was pretty cool loads of blood and stuff. Cheers!

And the grand finale was the mythical Rupert Murder (http://www.myspace.com/mrrmmrrm) I really really enjoyed his set, behind a mass of tables and laptops and other stuff was this guy in a mask rocking out to fantastic beats and sounds and harsh stuff fucking awesome I must say. I felt it was a perfect way to end the nights entertainment and everything seemed to be in 3D at this point it was class. Wow what a mental evening.

After that we started drinking upstairs this involved loads of booze talking to old Jamaican dudes saying goodbye to peeps and then my friends taking over the DJ booth to play 80's film music mostly hearts on fire and you got the touch oh yes and Incredible by Genral Levy!! After that we got a cab home and it was quite strange, I think he video'd this too.

Thanks to Rupert Murder for putting the Baron on, hopefully a few people enjoyed it. I think I'm going to go back to sleep...zzzzz

Oh yeah I must mention that they are doing another show in June 25th. I'll be on holiday at this point but if its anything like this one, it's going to be a very fine night of mad music. The line up is...

Tiger Piss!!! Shit I wish I was there for this gig, you gotta go to it!

Ok now I go back to sleep.

Heyhey, yet another amazing release out now.

If you can remember a few years back BBBlood's first full gig was at the Colechester Art Centre supporting the amazing Rank Sinatra. Well since that amazing show it's been on the cards for BBBlood and Rank Sinatra to do a split record. If you are not familiar with the genius what is Rank Sinatra then you are missing out on full on epic noise crooning from down under, as summed up by the BBC as "If pop has eaten itself, then this is what happens when it goes to the toilet". This 7" is the first release by new label Mourning Glory and hopefully soon I will have copies on sale (expect major spamming when I do). Art work on this record was done by Emily Hasselhoof and the BBBlood side by the infamous Dr Parsons. Amazing stuff and I feel really proud to have worked with some amazing people.

I currently have copies and they are shifting like hot cakes.. I accept pay pal. address baronbumblood @ hotmail dot com please contact for ordering information etc.

Thanks again to the amazing artists and the genius of 7U? for doing such an excellent job on this release. 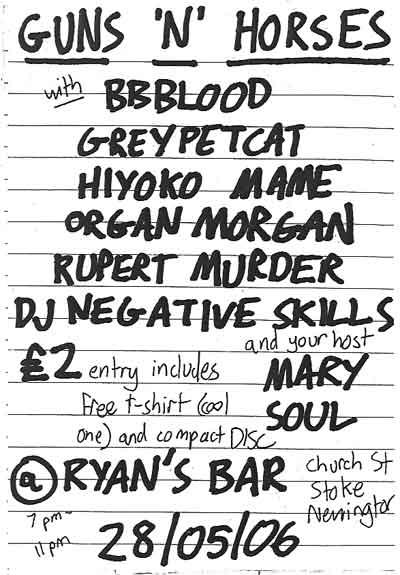 4) I'm proud to announce the newest BBBlood full length "The Cosmic Gash" has been released on Audiobot Recordings.

UK harsh peddling feedback junk highly influenced by distorted water falls and mutilated sponge bob's, cranks out a space-travelling tribute to the forefathers of noise and the love of having no restrictions. Equipped with lowlife microphones, metal objects, crunched teeth, electronic drills and bargain pedals, BBBlood shows no mercy. Includes the track that first appeared on the nu-metal/hybrid compilation that accompanied the Zero Tolerance magazine. Described by Bizarre magazine as ' tinnitus-inducing insanity, like being vomited on by some angry digital god, the only way to appease him is to drill holes in your brain, record it, and play the sounds to a roomful of very small children! '. Full color artwork by Italian beach-dweller Tisbo, in an edition of only 65 copies. File under = distilling harsh blood.