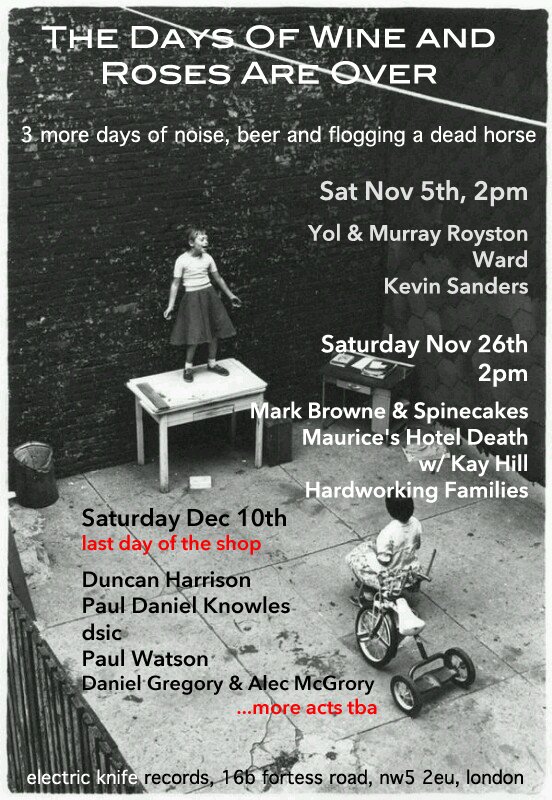 Saturday 10th of December
last day of the shop

I reckon it'll be a good afternoon of electronic music, drinking, and more...

So please come along and buy records.

Note about next BBBlood performance.

Evil MoistureAndy Bolus (Evil Moisture), whom one fan said he "almost preferred ...to Joseph Roemer", has worked since the early 90s in such fields as circuit bending (almost before this term really existed) and self-taught electronics allowing fabrication of basic synth building blocks, chaotic circuits, unusual ways of 'synchronizing' non-rhythmic sounds, alongside a use of magnetic tape (early evil moisture material was entirely edited by splicing tape) and electronics to produce a kind of low-fi musique concrete which would've no doubt been rejected by Ircams engineers as "technical fault, unlistenable", but it would've been rejected by Wattie of The Exploited as "fuckin shit" too, so whatever.. Recently he has been working more directly with tape 'live cutup', using multiple reel to reels, modified tape echos, and home made tapeloop delays, using as source material basic sounds such as oscillators, function generators ring modulated sounds, and home made microphone circuits such as ultrasonic (bat) detectors (http://evilmoisture.free.fr/bat/). In addition to many Evil Moisture releases he has also made exhibitions and books of his visual work, recently collaborating with the Danish artist Zven Balslev. He runs the label School Of Meat Cutting, releasing cassettes and also an ongoing series of "effects" and sound generators (examples here http://evilmoisture.free.fr/mangler/mashers.html). He also regularly does workshops where people can build such things as ghost detectors, optical theremins, noisy synths, and is teaching an ongoing project to make a haunted house in association with the Lycée Autogéré in Paris.

John Wall & Mark Durgan
It’s a pleasant surprise to discover how well-matched Wall and Durgan are as a duo. Considering their contrasting backgrounds and approaches, their respective vocabularies mesh very successfully, yet retain a healthy amount of contrast and tension. Durgan’s contributions, generated from modular and pressure-sensitive synthesizer, develop the vocabulary which began to emerge on his 2009 PAN album Ploughing Furrows From Rotten Burrows: thick, relatively slow-moving sounds concrete-style slaps, oscillating granular pitches and crude percussive blurts which hint at looping patterns.
Wall uses a computer, which presumably allows him to move and react more quickly. Consequently his playing is more volatile and diffuse, deploying fraying frequencies and jittery, sibilant textures, which evolve rapidly into detailed fractal-like clusters; or glassy surfaces ruptured by bursts of tonal splintering and structural disintegration. - The Wire

BBBlood
Proper noise of the highest order: racket torn from a selection of table-top electronics and homemade devices (loose contact mic taped into tobacco tin being a live favourite). He has a wire-walker’s sense of balance – the balls-out noise is gonzo enough for nostrils flaring, meathead catharsis, the calmer moments clever and detailed enough to reward serious contemplation. Snatches of field and domestic recordings are dropped into the mix adding a very exciting sense of location. Thus, Paul does not present a free-floating, atemporal harsh noise wall. Instead this is very definitely happening Here and Now.” - Radio Free Midwich 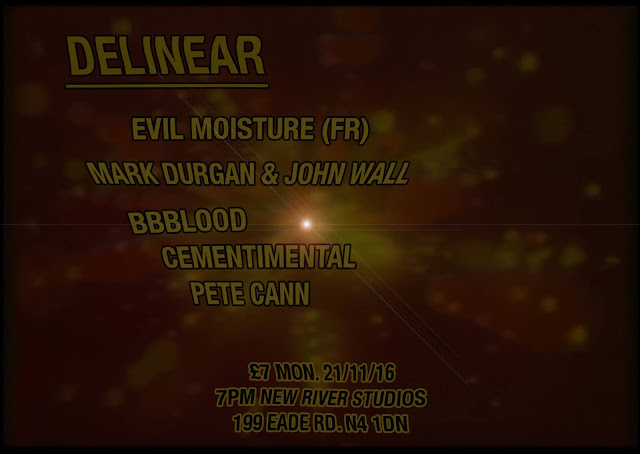 This blog hasn't really been updated much of recent what's a shame but I'll make greater effort to get this restarted. But as per the previous post there's not been much to report.

I forgot to post the details of this show last month. Thanks to those who came along. 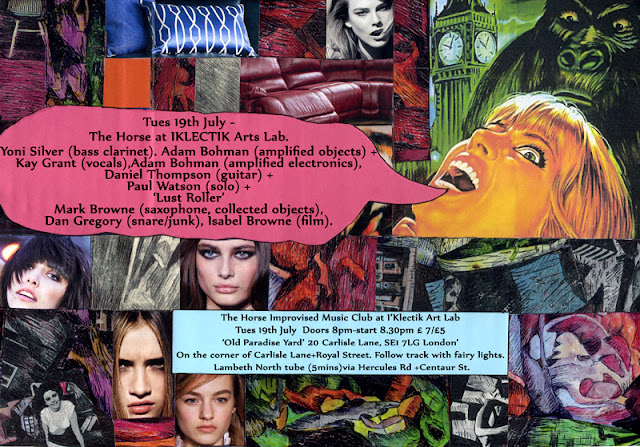 What do you expect?

Just posting a blog post here to say yes things are still moving, no heavy barrage of new releases or gig dates on this front.

Hopefully if I'm productive enough and all goes well there's a new tape and a full length to arrive this year.

Also a handful of gigs to be announced in the near future.

ADAM BOHMAN has been operating on the outer fringes of underground music for decades. Working with home-built instruments, found objects, tape cut-ups, collages, ink drawings and graphic scores. Favouring acoustic sounds over electronics, he explores the minute tendrils of sounds coaxed from any number of non-musical instruments and objects. He is a member of British experimental groups, Morphogenesis, The Bohman Brothers, Secluded Bronte, and The London Improvisers Orchestra. Adam's music is unique and experimental, incorporating Fluxus japery, musique concrete, sound poetry and free improvisation.

SINDRE BJERGA has been touring Europe, Russia, Ukraine, Japan and Argentina for many years and his incredible long form isolationist and cavernous tape-drone meditation have been released on more than 150 records across the underground spectrum. He’s collaborated with many artists, like Anla Courtis, Lasse Marhaug, Robert Horton, Culver, Posset and countless others. "What remains consistent from one release to the next is a sense of personality. Whatever sub-sub-sub genre he happens to be working in – space-drone, gurglecore, dictaphonics, others of his own devising – he imbues it with an engaging, informing intelligence. Playful, unafraid to meander, yet always attentive, thought through and sharp when it needs to be." - Rob Hayler

CLAUS POULSEN is a danish musician and producer who works with laptop, turntables, guitars, synths, electronics, field recordings, broken stuff and other sound sources. His output can sit anywhere within the blurred boundaries between ambient, avantgarde, noise and pop.
Having played in many bands (most notably 8 years of free improvisation with Alarm112) he decided to make music on his own in 2005. His journey as an artist is very much an on-going process and he prefers to experiment with sound and texture in an improvised fashion, with a goal of gradually honing his craft and covering new and uncharted territory. He also runs the label Skrat Records and makes cover art.

BBBlood - Proper noise of the highest order: racket torn from a selection of table-top electronics and homemade devices (loose contact mic taped into tobacco tin being a live favourite). He has a wire-walker’s sense of balance – the balls-out noise is gonzo enough for nostrils flaring, meathead catharsis, the calmer moments clever and detailed enough to reward serious contemplation. Snatches of field and domestic recordings are dropped into the mix adding a very exciting sense of location. Thus, Paul does not present a free-floating, atemporal harsh noise wall. Instead this is very definitely happening Here and Now.” (Radio Free Midwich)
on 2/02/2016 No comments:

The annual tradition of summarising the past year is more for personal reasons than for readers of this blog. To be honest with you it's been a relatively quiet year for my recorded output. Not as slow as 2013 I guess but I would have liked to have released more records.

Probably the main highlight for myself was the short string of dates with Duncan Harrison and Aqua Dentata. I think the highlight of these shows was playing Newcastle on the first night. Met loads of great people, great nights out, and fantastic music.

We released a CD to coincide with the tour, I have no copies left, Duncan may have some? We may repress the record. This was my only release of 2015.

Everyone has a end of year list these days, I'm no exception. However this year I don't think I've really listened to many new releases. You have to consider that I've listened to mostly records released or recorded by friends so there is a slight bias naturally.

I could probably add more but that'll do.

Ten years of this blog

It's staggering how time can fly, and when I think about the earlier posts on this blog it feels completely alien to me.

Ten years ago I think most of us was in a different head space and in different situations. I feel like I had a very different take on music and noise. On a whole I've stuck to my original agenda for making electronic music that has excited and interested me.

So yeah thanks for the support for the last ten years, things take a little longer to record and put out but I'm hoping to make more time for this in 2016.Watch this space.