As tradition I use this blog to document each year based on what I achieved. It's normally a fun review of the year passed, and a time to briefly reflect through a pretty limited set of criteria (shows played, favourite reords, gigs etc..).

I don't need to tell you, as you're living through it too but 2020 just wasn't great. I really hope those who are reading this are safe and well. Personally, I have to view it through the frame that I'm healthy, and incredibly grateful it's meant I've spent more time with my family, and that's been priceless.

Putting it aside (if that's possible). For some it's been a very productive year, the volume of new recorded output, online streamed shows, collaborations, and creativity from others has been immense. I'm truely in awe of those who have been able to make the most of a situation. I guess it's one of the only ways to truely keep sane at the moment. Some people I know have chosen to drink through the pandemic, for me the temptation has been there but it does feel like a waste. I guess we do what we do to cope. I'm hoping that 2021 I'll be more productive and organised in my work and noisy output.

Gigs, I did play the one show, the day before the lockdown in England was announced in March, this was a collaboration with Yoni Silver and was later released on Beartown Records. It was great fun and really made me excited about the potential for gigging.. But for now that can wait. In reflection it was a bad idea to play that show, but none of us knew at the time.

Recordings, the previously posted The False Face Society release and releasing a mini album as a digital download was all that was newly released. I also uploaded some older eps to Bandcamp. I did finish off a couple new recordings this year but they are yet to be released. More information here when I have news.

Best of 2020, in comparison to the previous years I've not really consumed as much new music, but here is a list (and I'll probably review it 2-3 times more after posting)

The False Face Society - Running Me Down

I contributed sounds for the first track on the latest The False Face Society record "Running Me Down" what was released on CD by Clean Index in Australia.

Running Me Down is a piece of fiction written by Russell Walker in Spring/Summer 2020, based on events in Normandy where his mother lived from the late 1990s. The writing was divided into five different parts and narrated by Walker, then sent to five different collaborators to provide musical accompaniment.

Hailing from Ruislip, West London but presently a resident of Hitchin, North Hertfordshire, Russell Walker’s writing finds home in diverse settings, from art rock units The Bomber Jackets and The Pheromoans, through to novel When New Towns Act Tough (Larching Books, 2016). Running Me Down follows Half Time 1916 (Chocolate Monk, 2018) and sits closest to the predominantly text driven sound work released previously by Walker under his own name, and as a part of Charcoal Owls and The Teleporters. Here variegated impressionistic electronics provide a fitting bed for a faultlessly dry five-part spoken narrative of undesirable company and parochial outlooks.

All text by Russell Walker

All other sounds by

First up some unused tracks were reprocessed by prolific French experimental artist I, Eternal.

That's all for now.

Just a quick post, This video was recorded over ten years ago but the sound quality poor as it is sounds amazing.

So whats going on? Recording, keeping safe, planning. Hopefully should be able to share some news with you all soon.

The recent split tape is sold out, but the digital is "pay what you want"

So some updates here. I hope this finds you well.

On the 13th March I played probably the only gig I will be playing this year, a collaboration with Yoni Silver @ 5 Miles. 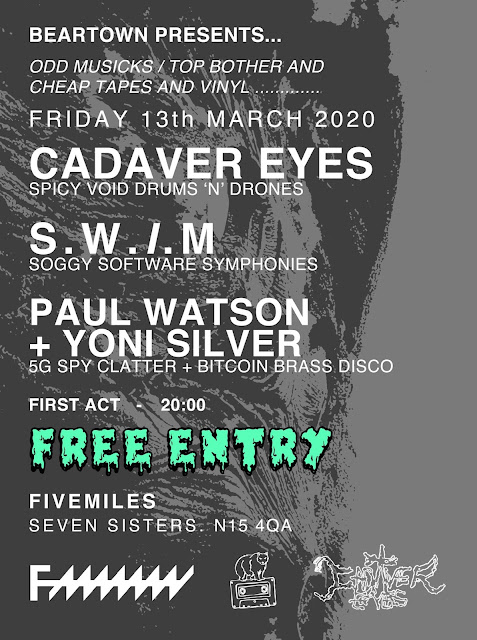 Was a great night. Here's a couple of photos 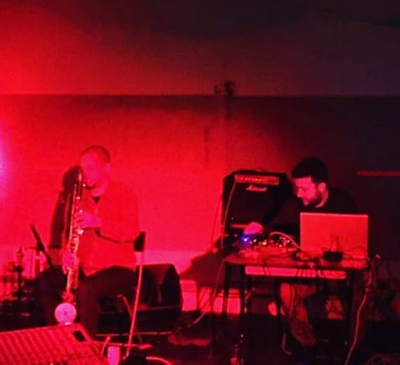 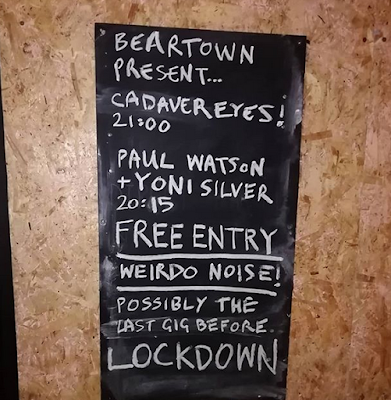 It turned out it was the last show before lock down. In retrospect maybe it shouldn't have gone ahead. But it's been that kind of year.

The recording of the set has been released by Beartown Records 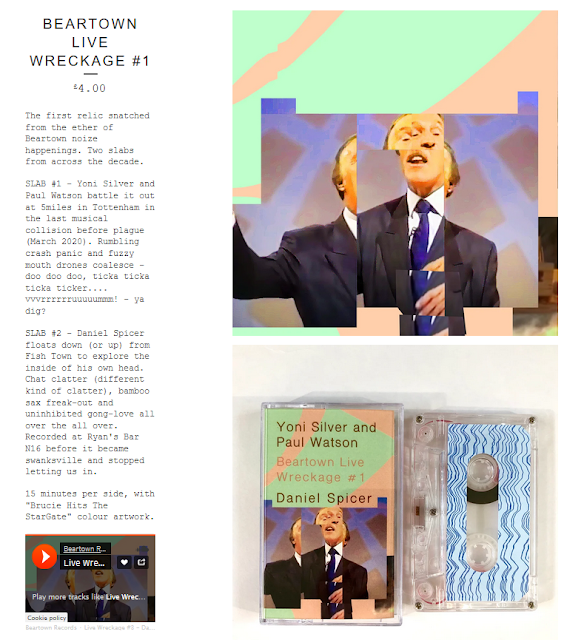 Whilst you are there check out Karen Constance's new tape and the Lasse 10". Great releases! Send the Bears my love.

Also I finished and put out the long overdue split c10 with Kindvriendelijk. It's a loud one, enjoy with a Belgian beer at any time. 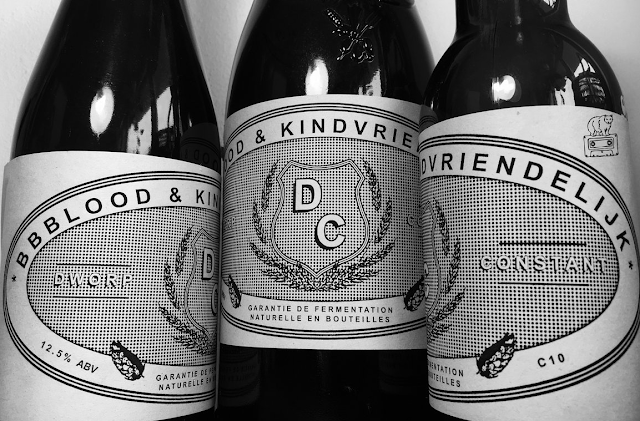 Yesterday I also released a new online only release. This comprises of 16 tracks I composed from the contents of an old SD card which lived within my old looping pedal. So a lot of the material here is what I would have used and buried within my live set up for the last 6 years.

I set myself the restriction to get everything done in one evening and I delivered. Normally I would labour over artwork or track titles etc... but keep it simple it's just untitled looped recordings.

Another thing I've not shared here is that I've done a series of Cycle ride noise videos over the last few months what have appeared on several Lock Down era live broadcasts.

Please watch the whole thing and subscribe to their channels!

I feature from roughly the 1hr mark


On that note did I ever share this video here?

No gigging, but hopefully some new releases coming soon.

I can quickly sum up my output for 2019, 2 gigs in a month, appreance on the radio, and one digital release that was recorded in 2013. All of the below are documented on this blog!

I also lost a hard drive of old material and digital copies of some masters what was quite annoying, but it happens!

All releases on Bandcamp are pay whatever you like, so go for it.

It's been a really good year however I don't think I've really listened to as much new stuff as I'd liked to have to. However from this year all the following stood out.

Belgium Cycle Trip to Ghent, Antwerp, and Brussels
The Kernel and Mills
The arrival of M.F.W. 18/12/2019

There's loads of unreleased material dating back over ten years. I'll probably revisit a lot of this with fresh ears, new ways of mixing the material. It's good to get the ideas coming. I just think I need to work on knowing when something is good to go. Gigging, yeah I might have a show in March, but nothing is confirmed at the moment. I can't see myself doing to many shows in 2020.