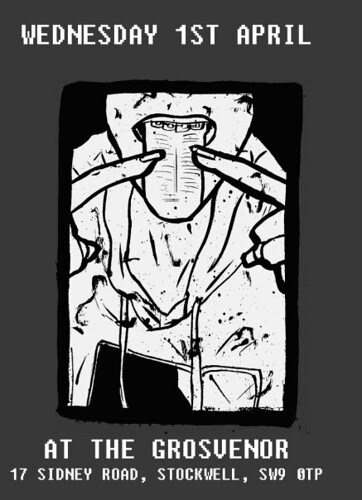 God Willing/Unicorn Hard-On have been forced to pull out, the situation might change but for now it's as above. ENTRY IS FREE. 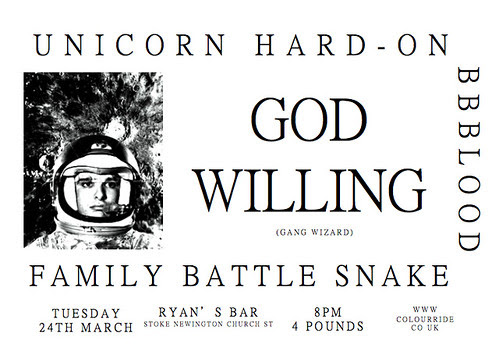 And April 1st (Next Week Wednesday)...

When bored I sometimes search the web for mp3 that other people have uploaded of my material. I don't really have a problem with people downloading my material so I kind of embrace it.

I only really have a problem with downloading if the release is still in stock and you're losing money due to everyone downloading rather than buying, this also annoys me when I see someone uploading a friends release when I know for sure it's still available.

It more so annoys me when you see other people making money out of your releases when you know neither the label or yourself are making any money from it....

HERE (Not worth viewing really)

From the split CD with Stuntcock, If anyone wants this rather than paying $0.2 per track I'd gladly give them a copy for free!

But anyway there's enough rants online about this topic. I'd like to share with you some of the BBBlood uploads I've found from other people.

New EP 'Flowers' Download (I still have copies and would recommend buying from the label or myself) but someones put it up there.

2006 EP Download Old and out of print, a quite popular release.

"Released earlier this year the bbblood 2006 ep is '6 tracks of all out noise giddiness and putrid fun.'
This was the first release in 2006 by the ever prolific one man mind fuck that is bbblood (aka the baron/baron bum blood ....) and is a self released cdr (also available on c60 tape i think).
The first track, Mystic Quarks takes us on a high pitched pyschadelic wander through white noise and television static. Loud, violent and 'in yer face' yet strangely hypnotic. And thats the case with all 6 tracks. In Felch babies night out bbblood introduces some synth type sounds which melt gradually into the fuzz. The third track Flame Party is less all out noise abuse. Manipulated tapes and contact mic'd percussion of some sort are given the bbblood harsh noise treatment and midway through the track we are treated to a few seconds of calm drone before launching back into bbbloods crazy world of amplified pain and paranoia. The sonic mayhem is explored further in Fake Chinese Spiel and with the distorted samples in Cognitive Disonance. The final track bbblood hates noise cops is 5 and a half minutes of ambient sounds overdriven to the max and looped. A quality harsh noise record"

"Caught in the lethargy of a Summer that just isn’t... the sonics of this split CDr make perfect sense, like viewing a projection through wobbly jelly laced with razors... throwing normality into chewed perceptions, leaving the mind to stilt walk on distended fingers... the landscape a pearling treacle, leaking from the wounds of trees... drenched in an unholy communion of machine innards and looped cul de sacs ----> void reaching ----> time breaching. I’ll be listening to this for years to come..."

I should be receiving copies some time soon. Message/Email for info, I don't know how many copies I'll be getting and it's a limited release. Might even be sold out by the time I publish this post, so it's best to contact the label.

Yep, it is sold out and I only got 2 artist copies. Hopefully someone may upload it in the future.

What's next? The God Willing / Unicorn Hard-On / Family Battle Snake gig is next week, I'm recording / rehearsing like mad. Then comes the Fecalove gig that we're putting on. I'm hoping to post the flyer up this week and get the whole promotion ball rolling. Also some really awesome releases are in the pipeline. When information is available I'll pass it on.

Also if anyone is interested I've added all the Old posts that was only on my Myspace blog.
on March 16, 2009 No comments:

Just uploaded a video of my rehearsal from last week in preparation for the upcoming shows. Using some new gear, sounding OK so far.

Watching this video again and then watching what other people do with a Micro Korg is quite funny. I've had my Korg for about 2 years now and I've only really just started to use it for noises. 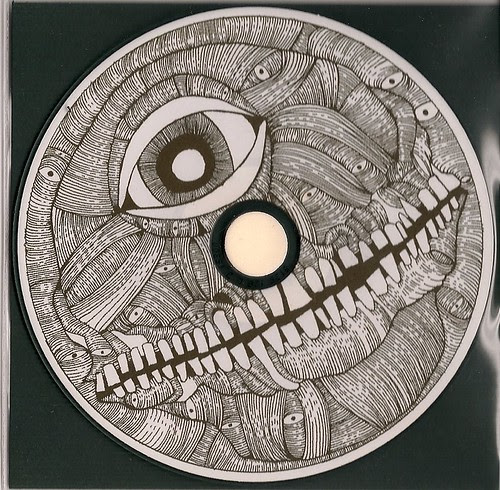 Buy your copies from their page via Paypal.