Big thanks to Sophie / Jake for organising Tor fest, it was great. 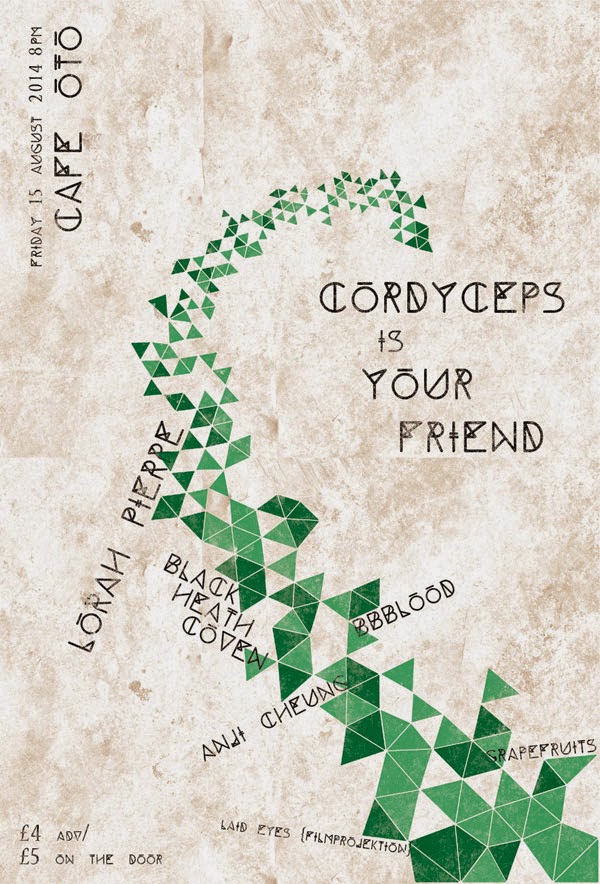 Lorah Pierre's work is inspired by adopting scientific experiments and the process of forgotten technology, with performances displaying the sonification and optical realisations of these processes. Black Heath Coven feature members of Vile Plummage and Space Witch and build coruscating doom atmospherics which spill suddenly into acoustic reveries and tape loops. Bbblood is London-based Paul Watson, who makes noise scree that moves from the envelopingly abstract to the caustically brutal. Anji Cheung crafts repetitious, minimal and meditative drone space for the mind's psychedelic landscapes - purely subconscious and of the theta wave. Grapefruits are the synth and cello improvising duo of Tartaruga Records' Max Bondi and Oliver Barrett (Petrels/Glottalstop).

LORAH PIERRE
Recycled materials and a DIY approach have been centred on developing systems that expose technologies chemical and physical properties through experimentation in hardware electronics. From interactive installations, performance and laboratory settings, Lorah has collaborated with scientists, artists and musician, focusing on knowledge transfer as a central part of her artist practice. Inspired by adopting scientific experiments and the process of forgotten technology, performances display the sonification and optical realisations of these processes.

BLACK HEATH COVEN
A very rare live performance from Black Heath Coven - a trio project from Stoke-on-Trent featuring Andrew Jarvis (Vile Plumage) and Daz Rowlands (Space Witch). Created in 2013 after a number of conversations between Andy and Daz about doing a project together in the vein of all things dark and all things art. Initially envisaged as a once a year occurrence of getting together recording and releasing the product of their experimentation. Bringing together acoustic and electric guitars, synths, FX, tape recordings of noise, recorders and bowed instruments. First release - ‘Cavern Of Mantras‘ - was released last Halloween on Cosmic Tomb Records. Drawing on drone, noise, vintage horror film soundtracks, doom, folk and more over its 36 minutes, it was one of the highlights of last year.
blackheathcoven.bandcamp.com

LAID EYES
Laid Eyes is a video artist and film maker currently living in South London. With a background in visual anthropology, he is currently drawn to making digital music videos exploring abstract forms, and performing live improvised visuals for the likes of Petrels, Talvihorros, Pascal Savy and Time Attendant. He has collaborated with a wide range of artists including Excepter, Maria Minerva, Ensemble Economique, and Ekin Fil, and has had work screened at Denovali Swingfest in Essen, End Tymes Festival in New York, and Dunk Festival in Belgium.

Watch this space for more news and release details. By this show I should have copies of my new cassette on Beartown Records