I'm excited to be performing with good friend and collaborator Duncan Harrison. This is the first live appearance for our duo.

All the details can be found in the flyer below. 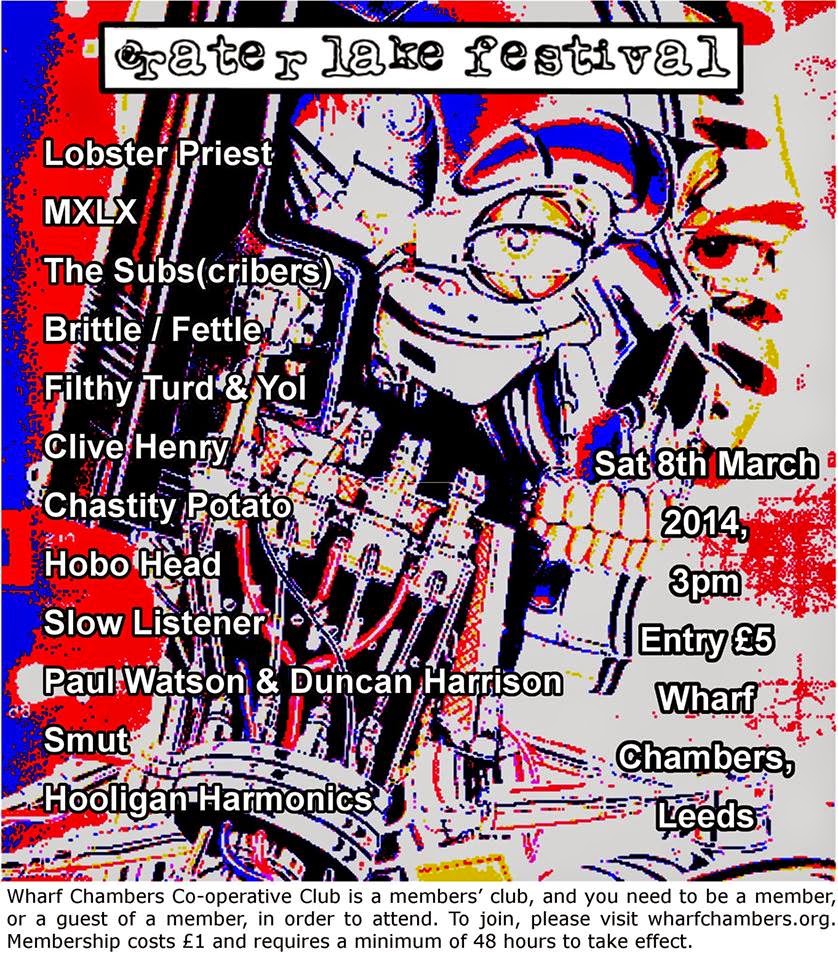 Pete Cann - "The annual thing I do to celebrate my birthday, putting on some of my favourite under the radar UK acts on in Leeds best venue."

A rare performance from these 3 faux shadowy figures, as nobody else is foolish enough to book them. Set your expectations to minus.

First time live pairing of the 2 of the UK's best and brightest.

'Paul Watson, aka BBBlood, is a maestro of noise. Harsh noise. Wandering through his extensive back catalogue, you'll come up against some pretty intense sounds; however, there's a depth and consideration with Paul's approach that soon has you warming to them and reaping the rewards accordingly...'

'An obsessive love of all sounds and strategies suggested by the lazy term 'weird music' guides the composition of Duncan Harrison's recorded work, though tape and vocal improvisation are a safe bet in live settings. His music has been issued on labels such as Chocolate Monk, Soundholes, Fragment Factory and Beartown. Lives and works in Brighton.'

“A long-time purveyor of quality tapes and audio curiosities, Robin Dickinson has been cleverly snapped up by the very good Exotic Pylon records and it’s a good thing too. ‘The Long Rain’ might be the most complete vision he’s come up with to date, as he blends a sensitive ear for decomposing drones (think an atonal William Basinski) with a keen understanding of music concrete and noise. The most marvellous thing about ‘The Long Rain’ is the very character of the sounds, and even in the digital realm it plays like a warped Dictaphone tape with bell sounds warbling and fluttering and crunching percussive sounds coming across like Leatherface’s chains draped around your neck before he drags you into the killing room. We’re probably making it sound much darker than it is, but that’s just the thing – Dickinson has left so much to the listener themselves; the music is at times just low end warbles, radio interference and other-worldly tones, so it depends on our references for those sounds how we actually hear them, and that’s a very good thing indeed. A stunning piece of music, one for fans of Geoff Mullen, PAN or Kevin Drumm – seriously, don’t sleep” - Boomkat

Bang the Bore organiser, Hunting Lodge bassist, Boduf Songs band member and tape label veteran under his recently retired littlecreature moniker (to ignore his forays into indie, hardcore, terrifyingly creepy doom, improvisation etc. etc.) Clive has covered an insane range of underground music while never sounding like anybody but himself, and always with a unique physicality. His releases are prolific, obtuse and often remarkable, but for me the best way to experience the music is live where his complete immersive involvement in the music is utterly infectious and absorbing in a way that few performers manage.

Début mangled meeting of minds between 2 of the UK undergrounds most brilliantly stark performers. Sure to captivate, amuse and unnerve in equal measure.

The Subs began around the start of the 90s as a project conceived entirely on the Amiga 500 borrowed from Neil Davies in order to reflect Loo Loo’s combined love of electro pop (a la The Army of Lovers) obscure Japanese anime, the film music of John Carpenter, Bootsy Collins and Death Metal. Enlisting the help of Paula Hayes on shared vocals (“The Carpenters for the 90s” as one gig flyer read) they released the 17 song cassette “Going Like the Clappers” on Phil Todd’s Betley Welcomes Careful Drivers label including such instant pop classics “QWERTY” and “I Have A Key” . They also contributed to the infamous 7 x 7” box set released by Stomach Ache, their track “Snow in my Pocket” depicted a love affair with a snowman that could only end in disaster. Releases and gigs from them are not frequent to say the least. Now joined on “Voice, bass, synth, trumpet, hair, logistics and costumes” by Mikarla Jarvis, Subs create beautifully simple and charming pure synth pop that you will never forget.

Aka Matt Loveridge of Team Brick and Beak> fame. This guy is a musical genius making intense and incredibly creative compositions. Everytime we’ve seen him play live he’s had a different set up and approaches the performance in a totally unique fashion building up tons of loops, drones, and interesting noise. We heard a rumour that this show might involve some saz rock outs but who knows what to expect. – Tor Music Press

The two sides of this plastic grooved abomination highlight Lobster Priest’s different aspects, each side bulging with third eye nutrition. Where Lobster Priest have always reliably delivered the goods in the form of the purest grown Anatolian psychedelic dronerock, the addition of artist and keyboard player Cara France has broadened/weirdened their sound. Now with a Carnival Of Souls aspect to their sound, and the increased ability to run on grooves as well as the fumes of abandon, the already liberated guitars of Bong’s Mike Vest and Totem Recall’s Cameron Sked are even more free to scrape the VU meter’s limits. The A side, the epic ‘Suzie Fuckin’ Q Death Trip’, manages to transmit a great emotional ache through its melody while still kicking out the jams. The sound may be reaching for the skies of the sunscorched open plains, but there’s always been a further skewed aspect to Lobster Priest beyond that of psychedelia. They’re not so much tripped out as they are ragged and a little bit fire damaged, at the odd crossroads of expanded pupils exhilaration and closed eye wrecked. Lobster Priest’s huge guitar workout tracks are more than just the produce of stoners, more than just a retread of past glorious trails. – Radio Free Midwich

Between sets Aimmar Cair will be playing songs and sounds to delight the ear.

Wharf Chambers Co-operative Club is a members’ club, and you need to be a member, or a guest of a member, in order to attend. To join, please visit wharfchambers.org. Membership costs £1 and requires a minimum of 48 hours to take effect.